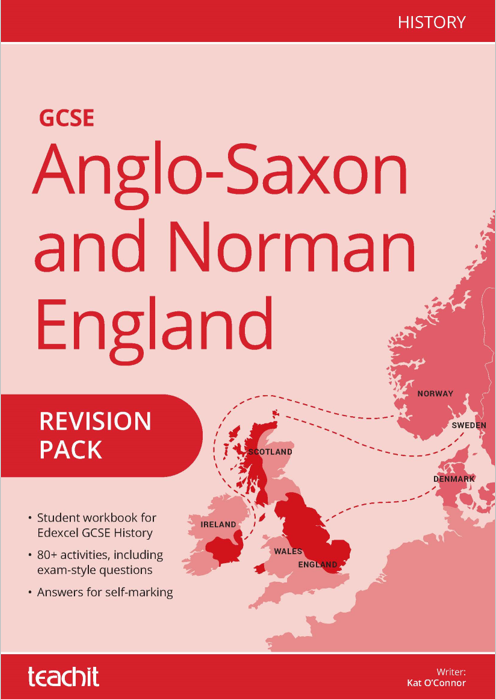 The workbook includes a variety of matching and sorting tasks, recap quizzes and exam-practice questions, ensuring students can revise independently and build confidence for their exam.

This sample shows an example of a student activity from the Anglo-Saxon and Norman England revision pack.

What made the Godwins so powerful?
Task 2: Colour-code the points below to categorise them into things to do with: land, leadership, marriages and the Church. Some could fall into more than one category, so be careful!
•    Having several earldoms between them meant the Godwins were the lords of many thegns, the warrior class in England. If they did decide to rebel against the king, they had a good chance of defeating him.
•    The Godwins married people who made them more powerful. When Edith married King Edward, Harold Godwinson became his brother-in-law.
•    As they held so much land as earls, the Godwins became very wealthy.
•    The Godwins were careful to impress the Church and show how religious they were. For example, Harold had Waltham Abbey built north of London.
•    Harold had the largest and wealthiest earldom (Wessex), Tostig was Earl of Northumbria, Gyrth Godwinson was given the earldom of East Anglia, and Leofwine Godwinson gained a small earldom in the south-west Midlands.
•    The earldoms held by the Godwins gave them special power and responsibility. As Earl of Northumbria, Tostig was expected to defend northern England from raids by the Scots. Harold was earl of both Hereford and Wessex (after 1053), and so had to defend England from attacks from Wales and across the Channel.
•    Harold Godwinson married Edith of Mercia (the sister of Earl Edwin of Mercia), and Tostig Godwinson married the wealthy Judith of Flanders.