Benefits of games for language learning

Language teachers and students love games, but what exactly are the benefits of using them – other than injecting a bit of fun into the MFL classroom – and what types of games does Teachit have to offer? 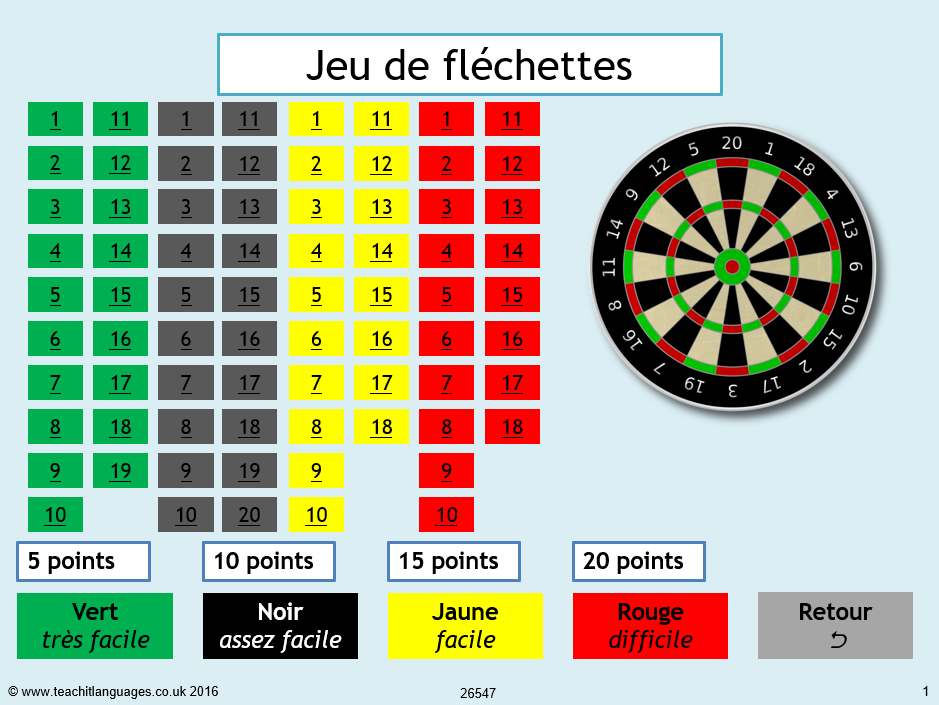 From Piaget in the 1960s to recent research on video games, much has been said on the cognitive benefits of playing games. A 2019 article by Richard E. Mayer,[1] researcher in education psychology at the University of California, Santa Barbara, found that the disciplines in which computer games are an especially effective tool are science, maths and second language learning – so that’s great news for teachers and students of modern foreign languages. This article explores some of the advantages of using games in the language classroom and recommends some examples from the Teachit site.

One of the main benefits of games for language acquisition is that they make repetition fun – language games such as battleships, bingo, splat ... Battleships also involves a real communicative purpose – students have to pronounce the items in the rows and columns correctly if they’re going to find their partner’s hidden ‘ship’ – while bingo and splat, if led by the teacher, expose students to a correctly pronounced model of the target language, as well as forcing them to listen carefully and working on sound–spelling correspondence.

Try our battleships games for French, German and Spanish for a variety of topics and tenses. We’ve also got a whole range of bingo games for the three languages, and also a KS3 Spanish splat game: Los meses y las fechas.

When it comes to fun repetition for foreign language teaching, Le corps or El cuerpo is one of my favourite vocabulary games on Teachit Languages. In this PowerPoint resource inspired by the TV show The Generation Game, words for parts of the body fly across the screen, and students have to remember more and more of them each time, reinforcing the acquisition of the new vocabulary.

Another advantage of playing games is that many of them provide built-in feedback so students know whether they’re getting the answers right or wrong – activities such as the Healthy living loop game for KS4 German, for instance, or one of our many dominoes games.

Games that can be played individually, such as loop games or sudoku puzzles, are great for reducing students’ anxiety about the learning process as they are low-stakes activities with little risk of students losing face when they ‘get it wrong’, and games that are played with the whole class can be done in teams, with more able students supporting the less able. In fact, the use of games in general allows for what Plass, Homer and Kinzer (2015) call ‘graceful failure’[2] – a game is bound to have winners and losers, and the fact that failure is just part of the game encourages learners to take risks, experiment with new language and try again.

Taboo is one of my all-time favourite games for language learning. It’s a genuine game rather than just a gamified task, so it’s very motivating, and as well as revising the ‘forbidden’ key word it practises the essential skill of periphrasis – of finding a way to express an idea when you can’t actually remember the word for it. Since the principle of transfer-appropriate processing suggests that the language skills used in the game should match as closely as possible the language skills we want students to be able to use outside the game, Taboo is a sure-fire winner.

I’m also a big fan of Blockbusters for vocabulary revision. Again, it’s based on a real game (a TV game show), and the competitive element of trying to cross the board before the other teams is hugely motivating. My students always loved it so much that I generally gave them a second chance to win by awarding points for finding the answers to the unused hexagons. You could play one of our ready-made Blockbusters games (for Spanish numbers, reflexive verbs or the simple future tense) or else make your own using our printable template or PowerPoint template.

Games can be engaging, sociable and personalised

Team games and board games are obviously very engaging on a sociocultural level and speaking board games are another of my favourites. I particularly like the KS3/KS4 German board game because the use of images as prompts allows for personalisation. Language learners can choose whether to form a statement, a negative sentence or a question – and in what tense – so a picture of a television screen, for instance, could be used to make sentences ranging from ‘It’s a TV’ to ‘Last Saturday evening I watched a film with friends, but generally you should try to avoid too much screen time in the evening because it can stop you sleeping’. It covers a whole range of topics so is great for revision or as an end-of-term activity, and the fact that there’s little text also makes it really easy for language teachers to adapt it for other languages.

A colourful and original variation on the speaking board game is the KS3/KS4 French game Jeu de fléchettes, in which students choose from a bank of questions that are ranked by difficulty using the colours from a darts board.

And we've got lots of them!

Other language games on Teachit include dice games; Family Fortunes; four in a row; happy families; last one standing; lie detectors; memory games; noughts and crosses; one pen, one dice; pass the parcel; quiz, quiz, trade; snakes and ladders; and a treasure hunt, as well as a whole host of playing cards and quizzes – so you're sure to find what you need for a fun and productive starter, language learning activity or lesson.

A shorter version of this article was first published as an Editor’s pick newsletter in June 2022.

Senior Content Lead at Teachit and former teacher of English as a foreign language.

Inspire students with a creative approach

Inspire students with a creative approach