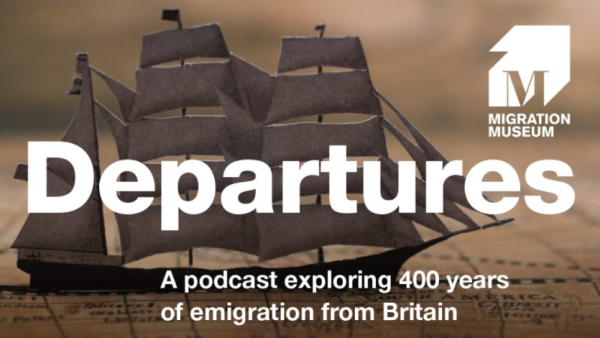 A series of free 30-minute podcasts from the Migration Museum that make a fascinating accompaniment to their Departures - understanding emigration GCSE resource pack.

Episode 1 - The swarming of the English

Mukti Jain Campion speaks to historian James Evans, author of Emigrants: Why the English Sailed to the New World, and to American historian Professor Linford Fisher to find out how early English settlers fared in the New World and how Native Americans responded to the incursion of their lands.

In the early 17th century shiploads of young women were despatched to America by the Virginia Company of London. It was hoped they would marry the English planters in Jamestown and help grow the new colony. But who were these young women? And how did they fare? Mukti Jain Campion talks to Jennifer Potter, author of The Jamestown Brides: The Bartered Wives of the New World.

Episode 3 - The Company men in India

Historians William Dalrymple, Professor Rudrangshu Mukherjee, Dr Kate Teltscher and Gurminder Bhambra, Professor of Postcolonial and Decolonial Studies at the University of Sussex, talk about the men of the East India Company who went to India and how their actions brought profound change for both Britain and India.

For more teaching resources from the Migration Museum, try Lesson Up, a series of five free interactive presentations exploring migration, identity and belonging.